Do you know that the enigmatic-looking, bushy-browed Paul Wesley grew up in a household as an only son among three all-female siblings? Learn ten other endearing facts about Paul Wesley, who is widely known for playing Stefan Salvatore in The Vampire Diaries and Aaron Corbett in Fallen, that would make you adore him more. 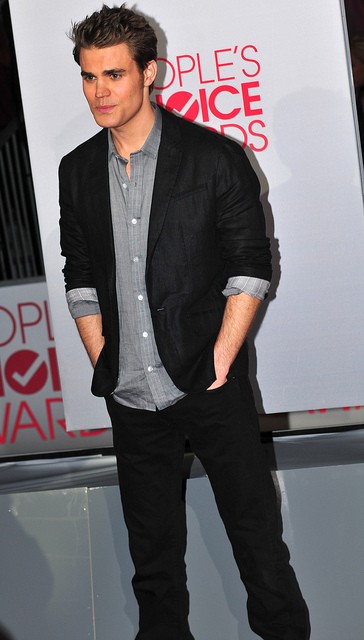 Although it was reported in December 2013 that Paul had been officially divorced from his actress-wife Torrey DeVitto, it’s pretty obvious that he tends to stick around for a long-term relationship and is monogamous. In 2007, he started dating Torrey. Then in April 2011, they tied the knot in a private ceremony. All in all they were together for almost 6 years.

In an interview with Audrey Fine for Seventeen Magazine, Paul said that throughout his high school years, he only had one girlfriend that he admitted to have “consistently dated.” He also said that he “haven’t gone on many dates.” Isn’t it a trait all women are looking for in every man?

In the same Seventeen Magazine interview, Paul proudly stated that he possessed “strong family values” and that he was very close with his parents. Now, that’s something. It’s also interesting to note how Paul’s good family ties could have gone into his portrayal of Fallen character, Aaron, who never met his parents and was in and out of orphanages.

Paul grown up in a big family: he has 3 sisters, Monika, Julia and Leah. Moreover, Paul used to spend each summer in Poland. His parents were born there and Paul left there his grandparents and all the kinsfolk. Paul owes that his mom reacted very reasonably to his teenage behavior, and only now he realizes the wisdom of such a behavior. Paul is thankful to his parents’ support for everything he has in life.

3. His first kiss happened when he was nine

When Paul was nine, a girl made a dare about having him kiss her. And that’s how his cute first kiss happened. The setting for his first kiss? In a swimming pool! Surely, it wasn’t a French kiss, but rather childish. Moreover, it happened underwater, have you ever had an underwater kiss? Later Paul confessed that is was his first and last underwater kiss ever. Paul admits that he didn’t know that girl and, of course, he had no feelings to her. However, he never was a womanizer. As I’ve already mentioned, Paul tends to stick to long-term relations.

Paul is one super-cool jock, because he is crazy about winter sports. His favorite pastimes include ice hockey and snowboarding. These activities help him stay fit and handsome. A lot of women find ice hockey the most masculine sport. Without doubt, Paul is courageous and manly.

The Vampire Diaries’ star really loves mountain. He used to spend time in mountains since his childhood, as Paul was born and grown up in New Jersey and was surrounded by mountains. Paul is a daredevil. Once he was given a speeding ticket by ski police. Yes, it exists. If you want to try snowboarding, here are some pieces of advice from Paul: don’t be disappointed at the first try and go to the gym all year long to keep fit.

Paul had been photographed numerous times publicly displaying his affection to his then-wife Torrey DeVitto. In Paris, the pair were even snapped spending a day or two shopping, having fun, and hugging each other.

When Paul was 14, he had a big crush on this girl. He attempted to impress her by having a huge Teddy bear delivered to her home for her birthday. But Paul used his dad’s credit card to pay for the Teddy bear, so the florist ended up placing his dad’s name on the card. The father of Paul’s crush was incensed, believing that the worst kind of attention had just been thrown his underage daughter’s way. Talk about a budding romantic move falling short of its goal!

6. He is charitable and is supportive of social causes

Paul takes advantage of his celebrity to support his causes. One of those is The Humane Society. Paul was awarded several times for animal protection on farms. Paul realizes that he is extremely popular with youth and that he has great influence on them. This way he wants to show them the right direction. It’s always easier to follow the patterns and strategies if they are suggested by your role-model. Paul understands that younger generations are our future and they can really change our world and society for better. His heart is in the right place.

A TV Guide interview revealed Paul Wesley’s penchant for motorcycles. He said that he rides his motorcycle “in daily life.” I should confess that Paul looks really cool on his motorcycle. He lives in LA so you can often see him swishing through the streets. Remember, I’ve said he’s a daredevil? But concerning the road and traffic rules Paul ‘s reputation is utterly irreproachable. Despite his bad boy image and rebellious look, Paul is a law-abiding citizen. He always wears a helmet and never runs the red light. Well, good for you, Paul! We don’t want you to get injured!

8. He’s the goofy sort of person who takes things in stride and loves to kid around

On screen, he is the endlessly brooding Stefan Salvatore. The real-life Paul Wesley, however, clowns around and has been caught on camera acting silly as he jokes around. Remember that uproarious TNT España Promo dance party where he gamely showed off his dance moves with Ian Somerhalder? Paul has a perfect sense of humor and this is one more thing that makes him so popular with girls. Claire Holt, Paul’s colleague and good friend, finds him the funniest person she ever knew. “Paul can softly defuse the tension and make you laugh,” she says. I’ve never doubted the comic side of his character!

9. He is fluent in Polish

The multi-lingual heartthrob spent part of his childhood in Poland, so he’s got his Polish down to a tee. In 2012, he spoke Polish at a Rachael Ray show. As I’ve already told, Paul used to spend his summer holidays with his grandparents in Poland so he had all the chances to learn the mother language of his parents. Paul owes that he is extremely close with his grandparents and now, when he cannot spend much time with them, every his trip to Poland is very precious for him. Paul strives to speak Polish with his parents and grandparents. Paul is very proud of this skill. He plans to pass this skill to his children one day.

10. His first photoshoot director was his mom

Paul, like many other actors, began his acting career as a model. To usher his early forays into modeling, Paul’s mom hired a photographer, styled his son wearing a beret and clutching an accordion as a prop. Now, that’s definitely cute! Unfortunately, that trick didn’t bring him in the limelight, despite his being utterly photogenic. However, Paul’s regular masculine features make him look great on camera. Anyway, Paul is thankful to his mom for her unceasing support and help. When Paul decided to give up studying for the sake of actor career, his mother approved such a challenging decision.

PREVIOUS ARTICLE Office Wars: The Major Workplace Issues and Disputes
NEXT ARTICLE 10 Celebs Who Started from the Bottom and Rose to the Top
POST COMMENT